Level of Curling: Light to no curling. More information on the natural curling of Tunisian crochet.

Notes: This is a really nice stitch. When I use a Twisted Simple Stitch in my patterns, this is the one I usually use. You don’t see it very often because it’s nearly impossible to understand how to do it from written instructions and, unfortunately, there is no distinct symbol. It’s the same as the Tunisian Knit Stitch. You have to use care and follow the written instruction for the twisted stitch if you have only a chart because the same symbol could mean either one.

The yarn shown in this stitch is Cascade 220 Superwash Wool in color 827 Coral. Thank you to Cascade Yarns for providing the yarn for this stitch library.

All images, charts, symbols and text, as shown on this page © Kim Guzman, 2019 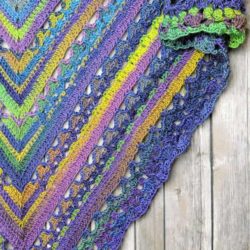